This past Friday, at morning assembly, our school welcomed former Canadian Olympian Deidra Dionne.  Deidra represented Canada during both the Salt Lake (2002) and Torino (2006) Winter Olympic games as a free-style (aerial) skier.  She spoke to our students about goal setting, the feeling of being an Olympian, the importance of others in our achievements, and so many other insightful and important messages. 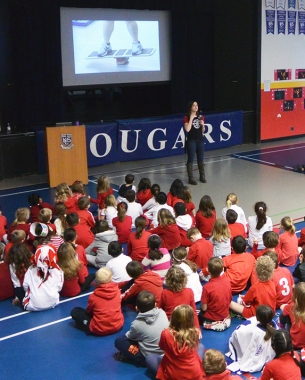 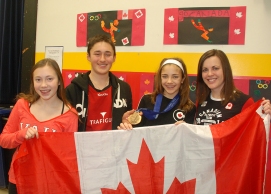 The message that resonated with me centred on the definition of success.  During her talk, Deidra mentioned her journey to compete in the Salt Lake Olympic games.  She described how she and her coaches planned to get to her first Olympics so that she could eventually stand on the podium.  She accomplished her goal by winning a bronze medal.  By all accounts, people would consider that a success.

More importantly, she went on to describe her journey to Torino four years later.  During training in Australia, she broke her neck.  Given this, free-style skiing at the Winter Olympics in Italy would seem, to many of us, an unreachable destination.  Not for Deidra.  Once she decided she wanted to ski again, Deidra committed herself to get to Italy.  And she did make it.  After all of the jumps made by all of the skiers, Deidra finished 22nd in a field of 23.  Given all she went through to get to Torino, she and her coaches, and all those who knew what she overcame to participate in another Winter Olympics, would consider this a success.  And I think you would too.

In school, sometimes people equate success with winning awards, first place teams, and medals for some competition or another.  There is no doubt you can consider all of those type of achievements success.  This type of success is easily identifiable in assemblies and awards ceremonies.  But there are so many other ways that our students should see themselves as successful: dealing with a difficult personal situation; overcoming a physical injury; doing something for the first time; improving their study or organizational skills, etc.

Deidra defined success in much the same way we’ve been defining success at KCS for 25 years:  try your best in whatever you do.  Success will follow.

Like Loading...
At Kingsway College School, we teach in innovative ways for 21st century learning. Our difference is in the design: students learn the habits that matter most for success in life through academics, arts, athletics, and citizenship.