In the late summer of 1980, in an era long before instant messaging, Canadians across the country were glued to national news outlets as a sombre story unfolded. Terry Fox, who had covered over 5000 km on his Marathon of Hope, had abruptly ended his run near Thunder Bay, Ontario. Only a few short weeks before, a triumphant Terry was greeted by thousands of cheering well-wishers in Toronto’s Nathan Philips Square. Maple Leafs Captain Darryl Sittler presented Terry with an NHL All-Star Jersey and then joined him on his run surrounded by cheering supporters.

It was September 1st 1980, and I can vividly remember the imposing voice of broadcaster Lloyd Robertson announcing that the cancer that had taken Terry’s leg, had spread to his lungs and the future of the Marathon of Hope was uncertain. I will never forget seeing Terry, with his parents looking on, as he lay propped up on an ambulance gurney proclaiming, “If there is any way I can get out there again and finish it—I will…”

Fast forward to September 30th, 2016. Thirty-six years later, Terry Fox’s brave pledge echoes deeply throughout the KCS community. Supported by a team of dedicated parent volunteers and the entire KCS school Faculty, the students celebrated the legacy of a great Canadian by completing an amazing Terry Fox Run. Since its inception, the KCS community has raised over $250, 000 for Cancer Research and we have been recognized by the Terry Fox Foundation as one of its top ten schools. The annual Run also allows our Grade 5 classes to embrace an important leadership role.

Under the guidance of Mr. Sawyer and Ms. MacDonald, the Grade 5 classes educate our school community about Terry Fox’s Marathon of Hope. Combining art, research and public speaking, each class prepares posters and presentations that share Terry’s amazing story and promote our September Run. This year’s theme was enriched through Terry’s own words as the students shared his memorable quotes. “Even if I don’t finish, we need others to continue. It’s got to keep going without me.”

The impact of this leadership opportunity is undeniable. Here are some insightful observations from the fifth grade leaders:

“I feel it’s very important to [stand up] and speak to the audience. Although my hands were shaking, I was hoping the younger kids would understand just what kind of a hero Terry really was!” I knew about Terry Fox before, but I was waiting for this exciting opportunity to help present the Run in grade 5. I was very impressed by the impact that Terry Fox had on all Canadians—I am surprised how so many years ago, word spread so quickly about him and his amazing acts.”

“I was nervous at first, but when I finished my message I was happy that I did it. I was really happy about how much the KCS community has raised for such an important cause. I was happy that grade 5 had this role because it helped younger students learn about Terry. Terry Fox was just a kid in many ways, he decided not to think of himself but others. He helped others realize that they can [make a difference].”

Thank you for a memorable day. Thank you to the Grade 5s for their outstanding job. We look forward to continuing this wonderful KCS tradition and celebrating the inspirational legacy of a true Canadian hero. 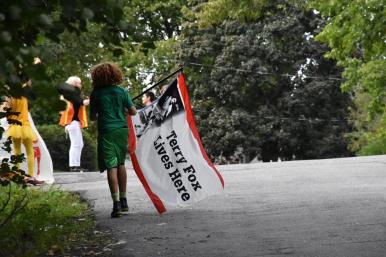