I love our Three School Rules, but I sometimes think we should just call them “The Three Rules”. Because they’re not only meant for students or kids – they’re meant for all of us. In my own life, I use them as a set of golden rules to help me navigate challenges, triumphs, and setbacks. In this series of three blog posts, I would like to reflect on what each rule means to me and our community, and the ways in which they can enrich our lives.

It’s becoming a bit of a cliché to say that the world is getting meaner. But some days I can’t help but feel that way.

One of those days happened to me over the Christmas break. As usual, I spent time during the holidays watching the annual World Junior Hockey tournament. I really enjoy that particular tournament, as I’m always so impressed by these young teenagers who are able to get up in front of the world and compete on behalf of their country. To me, it’s a testament to not just their physical strength, but their emotional and mental strength as well.

But this year’s tournament left me shaking my head in disappointment. Not because the team lost, but because of the way in which some people responded to that loss. In their quarter-final game, Canada lost in overtime to Finland. During overtime, Max Comtois, the 19 year-old team captain, missed a chance to score the winning goal on a penalty shot. Perhaps unsurprisingly, the loss brought out the social media trolls, and within hours this young man was being pelted with vitriolic insults and hate on his own Instagram account. A 19 year-old was asked to take on the job of leading his country’s hockey team, and rather than respect him for his efforts and courage, many people decided it was better to go out of their way to treat him with disrespect and contempt.

It seems to me that for some being negative and disrespectful has become a badge of honour. In a world filled with information overload, it appears that many have decided the best way to cut through the noise and get noticed is by focusing exclusively on other people’s perceived faults and missteps. I see it in politics, the media, online, and – most distressingly – the ways in which many young people talk to one another.

This is why the first school rule – “Respect” – is so important to me. Because respect simply means treating others like they matter. I keep a sign in my office that says “Be Good To People For No Reason”. To me, that’s the essence of respect. You pause before you say something because you never know what’s going on in that person’s life. You take a minute to understand their point of view. You give people the benefit of the doubt. You treat them the way you would want to be treated.

I believe that our community is a deeply respectful community. I see our students respecting the views of others as they listen to classmates’ ideas during group work. I see our families being respectful to each other in the parking lot as they wait patiently for a parent and small child to cross the road. I see our basketball players show respect for the feelings of their teammates (and opponents too!) as they cheer them on, even if they missed the game-winning shot. And I see our teachers showing respect to their colleagues when they jump in and help out without a word of complaint.

Treating others with respect is the key to success in life. Successful people are the ones who know how to both lead and follow, and you can’t do either unless you start by treating everyone (including yourself) with respect.

I think we do an amazing job of living and breathing respect at KCS. But I also believe we can do better. We need to keep raising our expectations for our school and each other. We choose what our school is by our behavior. And to me, that means treating each and every person who walks through our doors with the dignity and compassion that we all deserve. 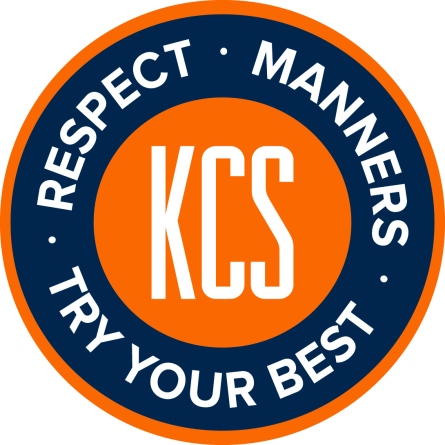