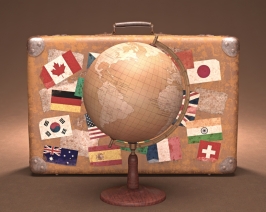 I spent the majority of my Thanksgiving weekend in Montreal with my son whose soccer team was playing in the Quebec-Ontario Cup. Watching competitive soccer while experiencing the culture and food of La Belle Province — what a great time!  The Ontario victory in the two game series, by a combined score of 4-0, made the chore of getting out of Toronto… on the eastbound 401… on a Friday night… of a long weekend… much more worthwhile.

But what happened on the weekend that made it really special and memorable happened on Saturday night. A number of the dads and coaches and I went out for the evening. During our conversations, I learned that all were newcomers to Canada in the last twenty years: Carlos (Portugal), Danny (Jamaica), David (Guyana), Johnny (Iran), and Mike (Poland). They all left much behind when they immigrated, but did so in the hope of a better future for themselves and their families. Many of their stories sounded much like those my grandparents had when they immigrated from England.

These dads and coaches were all appreciative of the chance to create opportunity for themselves in Canada over the last couple of decades. I was thankful to learn of their stories and to be reminded of what a blessing it is to be Canadian.