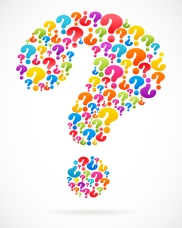 I thought it would!

A few months ago I wrote about the book Make Just One Change and the methodology it shared for teaching how to come up with good questions. For all the value of questioning, it seemed to me that the profession was pretty barren on direct methods for teaching this skill. Instead, some students seem to come by questioning naturally, and others pick it up as they mature, or not. Of course, students are exposed to lots of questions at school, and they’re regularly invited to come up with questions. Despite this, my gut was telling me we could accomplish more.

Then I read about the Question Formulation Technique (QFT). Immersing students in question-asking, it also offers the benefit of learning from one’s peers, it releases students from the threat of judgment, and it includes informed reflection, so students would start developing not only the habit of asking questions, but also the habit of asking increasingly effective ones. The method struck me as straightforward and destined to work. I had to try it out, and our grade 6 teachers were willing to let me. Their students were about to start their culminating social studies assignment and they needed questions to begin. Enter the QFT.

The Question Focus (or QFocus) was ‘Canadians Making the World Better’. The process began with a ‘question frenzy’, where groups of 3-4 students, one also being the ‘recorder’, came up with questions based on the QFocus. Rules of engagement were shared before the 7-minute frenzy: ask as many questions as you can; do not stop to answer, judge or discuss; write every question as it’s stated; and any statements were to be turned into questions. The recorder typed the questions in the class Edmodo newsfeed, thereby allowing all students to eventually see the questions of the whole class when the exercise was done.

The frenzy was followed by a brief exercise in open and closed-ended questions; a discussion on the students’ current purpose in asking questions (their QFocus and their assignment); and then an exercise in choosing and justifying their top three questions from the many others they came up with earlier.

The end result? Better questions than the teacher had seen students come up with in past years. They were mature questions that even caused concern in some parents who thought they were too hard (until they learned they came from their children). The students were welcome to change their questions if they felt they needed to, but instead most chose to stick with them, and by doing so ended up writing longer and better assignments than required.

Good questions are at the heart of great learning. At KCS we’ve seen over and over again that students are capable of more than most would expect, if we only persist in finding how to unlock it. We’ll be adding QFT to our list of tools for unlocking potential in students. And this will be one area of education where I no longer have that nagging feeling that we don’t do enough.