By the time this is published, the four months of construction on our house should be nearly done. The experience has left me with more than just an addition. 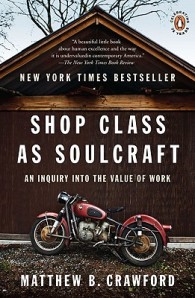 Browsing for a good summer read, I stumbled upon Shop Class as Soul Craft by Matthew Crawford. Crawford was a 14-year-old electrician, who moved on to tinkering with car and motorcycle engines, then went to university to earn a PhD in philosophy. Hired to work in a think tank, he assumed he had reached the pinnacle of achievement. He was highly educated, well paid, well dressed and looking forward to the intellectual challenges that would surely ensue.

Assuming the prevailing attitudes of the day, he grew up with the notion that university and the jobs it led to were a higher calling than the trades. University was for people who were good at thinking, while college was for those better at doing. Reverence was reserved for the former.

Not many people have so fully walked down both paths as Crawford. His voice of unique experience reveals that our thinking had more than a fair share of nonsense. First, the notion that all work following university requires supreme thinking he found to be supremely hollow. The many people he met working in the trades spent their days pondering and solving complex problems the likes of which he never found at the think tank.

Equally revealing, Crawford outlines the evolution of both work and attitudes surrounding it. Prior to the onset of the Ford Motor Company and other more efficient models of machine-making, the trades were recognized for what they are – pursuits that offer endless thinking as well as doing, that bring evident value at the end of a day’s labour. The rewards inherent in self-reliance have vanished for many of us today. Of course, university is a training ground for significant work. It simply isn’t the only such training ground.

Smart thinking includes scrutiny of assumptions. Thanks to the scrutiny in Shop Class as Soul Craft, and made real by our home renovation, my summer has included this unexpected bonus of appreciation and humility. Encourage youth to find their calling, and check assumptions at the door.

This article was first published in SNAP Etobicoke, October 2012.