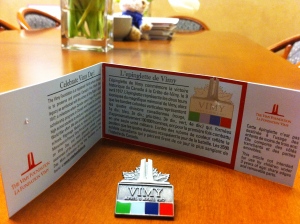 Last Monday I was sitting in my office when one of our grade 8 students knocked on my door and asked to speak to me. He had been on our European Battlefield trip with his Dad in March and they had written a thank you letter to me (as well as the five other faculty and staff who were on the trip). In addition he gave me a Vimy Pin. April 9th was the 96th anniversary of the Battle of Vimy Ridge, and he asked me to wear the pin the next day to commemorate the battle and honour those Canadians who had fought in 1917.

The next morning, I put the pin on and went outside during drop off. A parent rode up with her son on her bike. She noticed the Vimy Pin and said that she saw an article in that day’s National Post about Vimy. This led me to stop into our Business Manager’s Office later in the morning as I knew she had the Post delivered to her house. I asked her if she would save the article for me as I was interested in reading it. While standing in the doorway of her office, the Church receptionist overheard us talking. She asks me if she heard correctly that I was speaking about Vimy. I said yes, and then she asked me whether I knew the name of the designer of the Memorial.  Of course, I couldn’t remember on the spot!  That’s when she told me she was related to Walter Seymour Allward, the designer. She told me some stories, including that she has visited the Memorial twice, the last time in 2007 after it was refurbished; that she’s been in the catacombs beneath the Memorial; that Walter has other pieces of work at Queen’s Park, in Brantford, etc., and that he’s buried locally in Toronto. Her and her sister have researched Walter over the years. Of course this led me to a further conversation with one of our history teachers and one of the main organizers of our biannual battlefield trip. She said she would arrange for some of our students to interview the Church receptionist for their end-of-the-year history project.

The above story started with a thank you. A very kind gesture indeed, but one that had the added bonus of leading to an unexpected encounter at KCS. You just never know where good deeds will lead and where this story may go next.